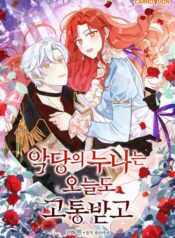 Alternative:
Author(s):Ellianyang / 엘리아냥
Genre(s): Fantasy, Manhwa, Romance
Views: 127 view
Bookmark Remove Bookmark
Latest Chapter First Chapter List Chapter
Description:
Read manga The Villain’s Sister Suffers Today on treemanga   I was killed in a car accident while trying to avoid a stalker. Is this a reward for dying a miserable death? I was reborn as a character in a novel that had, not a golden spoon, but a diamond spoon. I thought I could live my life over again. Until I found out my brother was a budding psychopath. “Sister, how about this doll? Do you want it?” “Leave it.” “What about this doll?” My younger brother ties people up so they can’t move, and insists on them being dolls. Even I am destined to be killed in the hands of my brother. ‘Let’s leave my little brother to the heroine of the novel before that day comes!’ But… my brother killed the heroine… Currently 20 chapters have been published, teenmanhua.com is considering translating the series.

Tales Of Demons And Gods

Tales Of Demons And Gods

A Returner's Magic Should Be Special

A Returner's Magic Should Be Special

Rebirth Of The Urban Immortal Cultivator

Rebirth Of The Urban Immortal Cultivator